just think of it as a signal

You know, I've played through Disc One more than anything else in this game — mostly because for years I could never manage to get much further without getting distracted and not finishing the game — and yet the plan to assassinate the sorceress has never made any god damn sense. Sure, they manage to trap Edea (behind a gate big enough for people to walk through, although I guess that thing she's wearing might get stuck on the bars if she tried to walk out), but their plan B is "if the shot fails the other team will take care of it."

Uh, hello? The whole reason you're trying to kill her with a bullet is so you don't have to go up against her head-on! Never mind the fact that she's a goddamn sorceress and oh, I don't know, maybe she has some sorceress powers to deal with bullets. 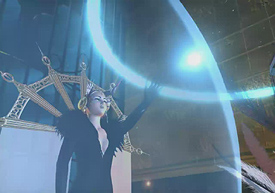 But I digress. This isn't a page about the many mind-boggling plot holes of FFVIII, this is about Squall and his willingness to take charge.

The thing is, even though the player knows full well that Squall's the hero of the game and he's been the main character this whole time, this mission is the first time we really see him stepping up in the leadership role. (After all, Timber was kind of a clusterfuck.) Here in Deling, Squall is given orders of the highest priority, and he's trusted to keep his squad in line to make sure they're carried out.

Squall struggles a lot with the burden of leadership later in the game, especially in Disc Two, but he doesn't have an issue with it here. And that's because it's a very different thing in this mission. As a SeeD, he's been trained to take orders from clients and follow their plans to the letter; as a mercenary, it's what he does. He's not here to make the decisions, he's here to do the dirty work. It's why he reacts with such disgust to the way the Timber Owls do things — he'd expected to be working for a group that had their shit together, not a one that huddled together on the floor to come up with their next plan.

The Deling mission is much more Squall's style. And hey, if it wasn't a completely ridiculous plan to begin with, maybe it would have had a shot.

Anyway, the other notable thing about this part of the game is that Squall shows some actual empathy towards the other members of his team. It's not much, but with Squall, a little goes a long way.

Rinoa: I was scared... [Rinoa clings to his arm.] ...Really scared.
Squall: It's over now.
Rinoa: I was scared... I was really, really scared.
Squall: You're used to battles, aren't you?
Rinoa: I couldn't... I just couldn't. I couldn't fight alone...
Squall: (...You're not ready for all this.) Better get going. [Rinoa clings to his arm again after he bats it away.] I haven't forgotten your order. Just stay close to me.

Okay, make that a very little. Still, for Squall, it's a start. He's doing it out an obligation to his contract, of course, and it certainly isn't out of any other feelings no matter what develops later on in the game, but he can at least acknowledge that this isn't something Rinoa can handle. She's not a SeeD, she's not trained to deal with this stuff, and this is why she was supposed to stay out of the whole thing. The least he can do is try and keep her out of any further trouble.

With Irvine, just a little bit later, he's a lot harsher. Of course, Irvine is a fellow SeeD and has the far more important task of sniping the sorceress, so when he chokes Squall has good reason to urge him on. When that doesn't get through to him, though, Squall takes a softer approach.

Squall: Irvine Kinneas!!!
Irvine: I...I can't...I'm sorry, I can't do it. I always choke like this... I try to act all cool, joke around, but I just can't handle the pressure...
Squall: Forget it. Just shoot.
Irvine: My bullet... The sorceress... I'll go down in history. I'd change the history of Galbadia... Of the world! It's all too much...
Squall: Enough! Just shoot!
Irvine: I can't, dammit!
Squall: Irvine, calm down. Everyone's waiting on you. I don't care if you miss. Whatever happens, just leave the rest to us. Just think of it as a signal. A sign for us to make our move.
Irvine: Just a signal...
Squall: (That's it.) Please.

It goes without saying that Squall gives the worst pep talks of all time, but, well, there it is. Still, he manages to get Irvine motivated enough to fire. And though Squall probably doesn't realize it at the time, being up there to encourage Irvine is far more important than being part of any kind of backup plan. That's what being a leader is all about: keeping your squad motivated even when things look grim, helping them to do their best. It's a lesson Squall doesn't learn until much later in the game, but he gets a taste of it here, and that's what's important.

It's just a shame the rest of it goes to hell.

six: because this place is important to me →